You are using an outdated browser. Please upgrade your browser to improve your experience.
Skip to content

What is pasture dieback?

Pasture dieback is a condition which causes the death of native and improved sown pastures by affecting plant health and function, reducing the productivity of affected properties. It has been observed in a range of soil types and grass species across Queensland and northern NSW. The condition is not going away, and the area impacted is increasing.

The condition occurs episodically, with the current outbreak first identified in early 2015 and spreading across eastern Queensland in subsequent years. However, there has been earlier recorded outbreaks. Graham and Conway (1998) recorded dieback in central Queensland buffel grass pasture in 1993, specifically American and Gayndah cultivars were affected, while the taller Biloela cultivar was not. Summerville (1928) noted mealy bugs as the cause of dieback in paspalum pastures in the Cooroy district, and also on the Atherton Tablelands. Heliococcus summervillei nr. Has been found a few times in different grass species on the Atherton Tablelands including Brachiaria (signal) grass, Setaris, Paspalum and Rhodes grass at Tarzali, Rocky Creek and also in Kairi. Pasture dieback has also been confirmed in northern NSW.

Reliable estimates of pasture affected by dieback are currently not available, however, AgForce has predicted the outbreak to cover a large area of productive Queensland, with estimates ranging between 400,000 and potentially up to 4.4M ha.

The following grass species found to have been affected: 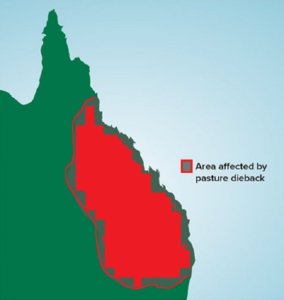 Map showing areas of Queensland that have been affected by pasture dieback.

All sown improved pastures vulnerable to dieback. It is less common in native pastures. Biloela buffel and some varieties of setaria are less susceptible. Dieback does not affect legumes and broadleaf weeds. Dieback is more prevalent in humid weather and long dew periods. It is common in un-grazed areas and where there is a bulk of pasture biomass. Not common in heavily grazed paddock where pasture is short and in native pastures. Not as common in cell-grazed paddocks. New pasture seedlings eventually succumb (Stuart Buck, DPI, 2019).

Past research has largely failed to identify any specific cause, nor appropriate management solutions for affected graziers. Although it is not definitive, there are strong indications that pasture mealybugs (Heliococcus summervillei nr.) are the leading cause of dieback; and is the only known species from this genus known to occur in Australia. MLA and QUT believe pasture mealybug are a causal agent, whilst UQ have found the white ground pearl, Margarodes australis, at about a dozen pasture dieback sites. Experiments have not yet confirmed mealybugs causing dieback. Mealy bugs have been widely detected on pasture grasses showing symptoms of pasture dieback. However, research also indicates there are secondary causal factors at play and understanding these is key to understanding why episodic outbreaks occur.

Possibly the mealy bug and ground pearl are the vector for other diseases? Mealybugs may be effectively swooping in when the grass’ immune system is deficient. Whether it is dieback or not, a plant that has diminishing health is going to be susceptible to secondary parasites or fungus. Dieback is a complex issue and varies across landscapes, pastures and symptoms. Other causes still under investigation by MLA consultants and DAF (Stuart Buck, DPI, 2019).

Possibly mealy bugs may be an opportunistic secondary infection that come in when the plant is weak and there is something going on in the movement of the fluids in the plant that are making it attractive for mealy bugs to come and have a go at it?

Currently there are no pesticide registrations for this use; there is a risk of exceeding meat residue levels, plus beneficial soil insects and microbes will be destroyed. Predatory beneficial insects (e.g. Cryptolaemus ladybird) may naturally build up in numbers over time to suppress pasture mealybug.

Additional management options under investigation by MLA and DAF has a replicated field trial of 14 treatments at Brian Pastures Research Station, Gayndah. 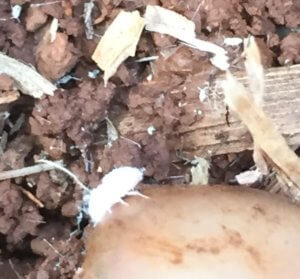 Close-up of a mealy bug in-situ.

Symptoms to look for

The symptoms of pasture dieback generally occur initially as patches in otherwise seemingly healthy pastures. If you suspect pasture dieback on your property, be on the look-out for:

Initially, patches of dieback are roughly circular, ranging from 2–60 m in diameter.

These areas can grow irregularly, spreading at speeds ranging from slow (cm2/week in the dryer, colder months) to rapid (ha/week in the wetter, warmer months). Multiple patches can coalesce to form large, dead areas.

Producers have also observed that dieback is most severe in areas of long grass with large amounts of thatching – for example, under fence lines and areas of rank, moribund older growth – like along roadsides.

There have been theories espoused that dieback may be a “soil health issue”, but if that is the case how come dieback is found on ungrazed roadsides, where the paddock over the fence is overgrazed? Or where a fire has been through – new pasture is unaffected?

We believe pasture dieback may not be associated with one causal agent, either disease-wise, or vector.

If it is a soil health issue – it is unlikely to be nutritional. If it is a soil ‘out of balance’, then it may be biological – i.e. one or several pathogens (fungal or bacterial?) may be responsible and a “superbug – agent” needs to be found to control the pathogen. Is it Pythium, Phytophthora, Rhizoctonia or Fusarium?

To use the “Gotham City” analogy (the law of occupancy) – “… when the good guys are not present, the bad guys take over. When the good guys are present, the bad guys are suppressed… we need a “Superbug”. Microbes increase the availability of both macro and micronutrients in the soil. Improving soil health through soil amendments and the addition of beneficial microorganisms is increasingly considered as an environmentally friendly alternative to chemical use. Through manipulating and stimulating microbial communities in the soil, restoring the biological balance, we could provide a platform for developing a solution to pasture dieback.

Research need to occur into what biological or cultural methods can be employed to promote recovery and increase ground cover with cost-effective approaches.

What is being done?

A range of industry bodies are doing research and working on pasture dieback. Read about their programs:

Currently there are no APVMA approved and registered chemicals which can be used to treat pasture dieback.  Bifenthrin and Confidor (Imidacloprid)however, are known to protect clumps and strips from dieback when the dieback was spreading in trial pasture situations. This indicated controlling the mealybug, seemed to control the dieback. These chemicals are most-likely cost-prohibitive for extensive pasture situations.
The following are APVMA Minor Use Permits for pasture mealybug control in small outbreak areas in NSW and Queensland pastures:

It has also been hypothesized that micronized Diatomaceous earth, may control the mealy bug (a bit like glass chards cutting them in soil. It would be interesting to see if soils high in silica are affected by dieback.

The use of fire could be a possible control. When mealybugs can be seen on grass and on the soil surface, burning will reduce their numbers. However, mealybugs will generally return as they have been found in the soil profile up to 800mm.

How to minimise the spread

There are several steps that can be taken to minimise the spread of pasture dieback:

Certainly, a mixture of grasses and legumes within a pasture sward buffer the effect of dieback and builds resilience. Areas of replanting should be based on a pasture mix. Thomas Elder Consulting can advise on such mixes, for the soils and climate, and best methodologies moving forward in pasture recovery.

For more information on pasture dieback and other agricultural cropping issues, consult with Peter Spies and the Thomas Elder Consulting team.